The North Coast of Lake Trasimeno begins at Borghetto, from where a tortuous road leads up to Tuoro through the ‘Malpaso’, that narrow passage fatal to the Roman army which was severely defeated here by the strategy of Hannibal.

It was here, along the northern coast between Malpasso and Passignano, with Tuoro at the centre of the battle, where the epic encounter between Carthaginians and Romans 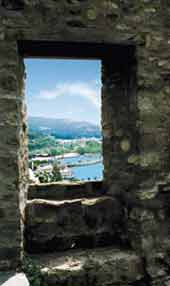 took place. And from here the legend of Hannibal had its beginnings and was to become the nightmare of the Romans for the next twenty years.
The north coast is the only side of the lake with hills descending right down to its shores. The road still running through it was for 1,500 years the only one linking Perugia to the Tuscan cities of Arezzo, Siena and Florence, due to the fact that until 1600 the marshlands of the Val di Chiana prevented any frequent use of the western area. This road was used by merchants with their wagons and by armies parading beneath the Montegualandro Manor, the last military outpost of the Pontificial State. There was also the imposing castle of Vernazzano in defence of Tuoro, all of which remains standing today being a leaning tower, the impregnable town of Passignano and Monteruffiano, and higher up, dominating the lake, Castel Rigone, whose original fortified structure appears to be of Gothic origin.
Today the north coast is easily accessible thanks to the Perugia-Betolle freeway which crosses it and links up to the main roads and highways. The area offers first-class hospitality, with attentive and varied solutions for visitors, and with restaurants combining traditional local dishes with their own personal touch..