The main events taking place on the north coast trace back their origins to local history.
At Passignano the ‘Palio delle Barche’ or Boat Race is a spectacular re-enactment of a tragic event that took place in 1495 when a small army from Siena with some Perugians occupied Passignano Castle. The reaction of Perugia was so violent that the invaders hoisted boats ont 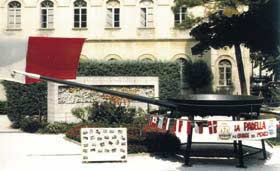 o their shoulders and ran, then tried to cross the lake and reach the islands, but without success. The present-day reconstruction, the only one of its kind, takes place in three phases, the first and the third in water and the second on land, with men carrying boats on their shoulders running through the narrow streets. This race is held on the last Sunday in July every year and involves not less than 160 contestants divided between the four districts of the town. Tuoro responds with ‘Ferragosto Torreggiano’ in August with numerous manifestations such as ‘Mission Hannibal’ a theatrical adventure along the site of the Battle of Trasimeno, with a spectacular chariot ra 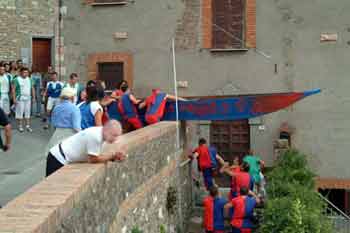 ce. Castel Rigone recalls its Gothic origins with the ‘Giostra d’Arrigo’ jousting contest and a parade in perfect Gothic costumes, the only one in Italy.
Culinary art is held in high consideration, beginning with Borghetto with one of the best Sagra del Pesce’ or Fish Festivals. At Tuoro an entire bull is roasted, at Passignano fish is fried in Guinness record sized pan with a diameter of 4.30 metres, a circumference of 13.50 metres, a 7 metre long handle and a total length of 11.30 metres with a weight of 2,000 kilos. This giant pan can fry up to 200 kilos of fish an hour and takes from five hundred to eight hundred litres of oil. And everywhere there are concerts, theatrical representations, jazz and blues, historical parades, wine and oil festivals, sailing regattas. Something for every taste and impossible to be bored. All these events can be found in the “Prossimamente” (home page of italian version) or Coming Up list which will be brought up to date as and when they occur.